It is with great sadness that we share the passing of Jan Habeck. 50 years by the side of Ret. Chief Bill Habeck 33 years as Chief and years as the secretary of our department, her support and dedication did not go unnoticed. Adell Fire Dept. will honor her with a walk thru Friday at 4:45p, Any departments attending we will be meeting at 4:30p at the Ernisse Funeral Home 1167 Washington Ave., Cedarburg.

What were you doing the morning of September 11, 2001?  Were you born yet?  As we reflect what happened twenty years ago on what some the second day of infamy, let us not forget those responded to help those in the towers of the World Trade Center.  This day of infamy, changed the lives of all of us in the United States and around the world. The lives of 351 first responders changed forever!

According to John Sponholtz, “There is a pod cast by a pair of retired FDNY members, Lieutenant Lou Rufrano and Kevin Kubler, members of Special Operations Command (SOC).  On one episode, there was a discussion of that day, and how difficult it was to grieve the many lost members (SOC was particularly devastated), start the search of the rubble, figure out how to cover the city with the remaining manpower and equipment, and check on their own families.  Where would one start?

Lt. Rufrano was succinct answering the question of what was the hardest part of that day.  Both Kevin and Lou were members of Squad 288 which is housed with Haz-Mat 1 in Queens and responded.  From this station alone, nineteen members were lost on the morning of 9/11.  Let that sink in for a minute – 19.  That is a staggering number for a two-company house.  One of the problems was that this all happened just as the shifts were changing in all New York fire houses, so the compliment of members on each apparatus was greater than usual and the tracking and accountability was not done to normal procedures.  The normal riding lists were recorded per usual, plus extra members also responded.

Lou’s story brought tears to many that were reading the blog, as he recounted looking at the apparatus floor later, at the nineteen pairs of shoes, sets of two strewn about where his brothers had stepped out of them and into their bunker hitches, never to return.  One of the methods utilized to establish who was missing and unaccounted for was the shoes.”

From this story Ron Naab and John Sponholtz created a special ceremony to remember these heroes of the Fire Department of New York not only on September 11, 2001, they were heroes every call that the jumped out of their shoes and into their bunker hitches.  The goal is to collect at least 351 pair of slightly used, preferably new shoes.  These pairs of shoes will be set on the sidewalks of the Wisconsin Firefighters and EMS Memorial as a memorial to honor the 343 firefighters of the New York Fire Department and 8 Emergency Medical Technicians that responded to help.  These heroes made the Ultimate Sacrifice.

The goal is that these pairs of shoes will be taken to King Veterans Home (near Waupaca) and the Veterans Housing and Recovery Program at Chippewa Falls, Green Bay, and Union Grove for our veterans living in these facilities.

Gordie Boucher-West Bend has teamed up with Ron Naab of the Allenton Vol. Fire Department and American Legion Post 483 to allow those that would like to support this noble venture by being a collection site for the these shoes.  The shoes can be taken to Gordie Boucher Saturday, Monday or Tuesday during their hours of a special sales program they are holding. 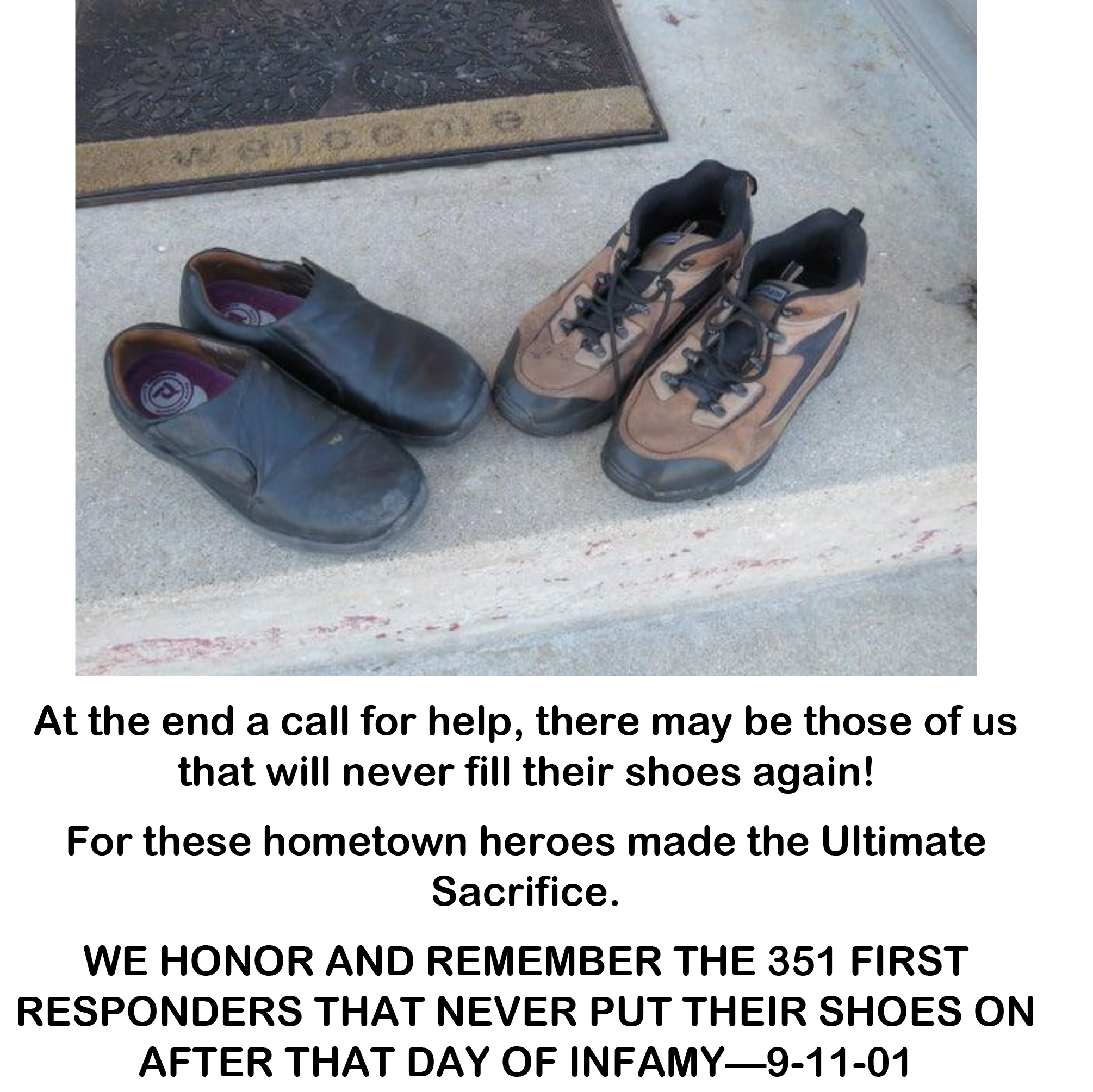 Attached is the agenda for the upcoming spring meeting and banquet.
Don’t forget to send in those members that should be recognized for EMS and Firefighter of the Year along with Heroism Awards.
We need your list of those members that have passed away in the last two years for the Memorial Service as well.
Agenda
2021 Nomination Form
Ronald Naab
Secretary
Badger Firefighters Association

The Hartford American Legion Post #19 announced their 2020 Hartford Fire Fighter and EMT of the Year awardees on March 4th. This year’s winners are Fire Fighter Brian Wolters and EMT Katie Feiter. Both members of the Hartford Fire and Rescue Department were recognized for their exemplary performance and leadership in their rolls of serving the public. Brian has been with the department since 2014 and currently serves as Fire Lieutenant and as the Department’s fire training officer. Katie also started with the department in 2014 and serves as both a fire fighter and an EMT and is currently finishing her studies to become a paramedic.

BADGER FIREFIGHTERS ASSOCIATION HONORS SIX MEMBERS OF
THE WEST BEND FIRE DEPARTMENT
Recently Ron Naab of the Badger Firefighters Association presented recognition awards for
twenty-five years of service to the West Bend Fire Department. Those being honored for 25
years were:
Battalion Chief John Spartz
Captain Kenny Asselin
Lieutenant/Paramedic Andy Whitmore
Lieutenant/Paramedic Michael Heinen
Driver/Operator Larry Schwechel
Paid–On–Call Firefighter Steven Rusch
Also honored for 15 plus years of service as a Battalion Chief, was John Spartz. John was a
leader of the Washington County Hazard Materials Response Team, along with many other
outstanding contributions to help his fellow members and other firefighters and EMT’s. Chief
Spartz last day on the job was Saturday, March 6 th. 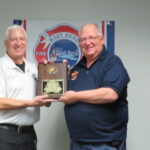 It is with a heavy heart that we announce the passing of retired Port Washington Firefighter, Jeff Plier. Jeff served on the department from May 1980 until June 2000. He is the son of retired Assistant Chief Franklin (Joe) Plier and the brother of former member Ron Plier. He is survived by his wife, Pam and son Chris, as well as his parents Joe and Kathy, sisters Lisa and Jill, brother Ron, and many nieces and nephews.

A Memorial Mass of Christian Burial will take place at 6:30PM on Wednesday, March 10, 2021 at St. John XXIII Parish, St. Mary’s Church site (451 N. Johnson St. Port Washington, WI 53074). Fr. Patrick Wendt will preside over the Mass. Visitation will take place at Eernisse Funeral Home Port Washington on Wednesday from 3:00-6:00PM. There will be a Fire Department walk through at the funeral home at 5:30PM.  Per Chief Mark Mitchell.

At this time the Spring Banquet/Awards Program is questionable.  We are still determining if and how we can proceed to keep the event meaningful and safe.  The tentative date is April 25th.

Reminder, that we would like to honor those of your department with awards for the following accomplishments:

One of his greatest accomplishments in his tenure with SFD was the time he spent coordinating the 9/11 parades for Ozaukee County that were hosted by Saukville Fire Department. Dick spent many, many hours every year putting together a new program. If you were ever part of one, you know the time commitment required to put those parades, and the ceremony following, together.

Dick will forever be missed by the Saukville fire community. We wish the deepest of sympathies to his family during this difficult time.
I personally had the opportunity to interact with Dick in the past.  He was the epitome of serving your community and country.  R.I.P. Lieutenant.

As of Tuesday, the 2nd of February there have been 18 firefighters/EMTs that have made the Ultimate Sacrifice.  Most of these are COVID related. In Wisconsin, we had 1 EMT and 2 firefighters that have died in the Line of Duty as of the end of 2020.  We have not had any thus far in 2021.
Stay safe, Stay Cautious and Go Home,
Ronald Naab
Secretary
Badger Firefighters Association
President Arbuckle has asked that I forward your department the attached information for awards given by the Badger Firefighters
We honor those that have served: 25, 50 and 60 years
We honor those that served their department in a meritorious manner for the past year or for a period of time
We honor civilians and emergency personnel that act in heroic manner to save the life/lives of other[s]
We normally do these presentations at the Annual Banquet, which hopefully will happen in April.  However, if you would like your members, especially those with recognition of years of service we can present or deliver so you can do so at your Appreciation/Awards Banquet.  Just let us know.
Nomination Form
Ronald Naab
Secretary
Badger Firefighters Association 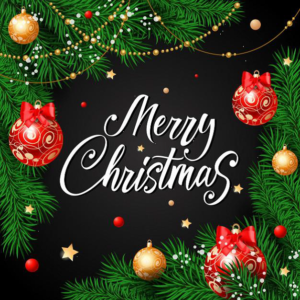